Fill out the form below if you’d like to find out more about how we can help you improve resilience.

Stay in the loop to receive news and updates, along with exclusive access to pre-order the book.

You are using an outdated browser. Please upgrade your browser to improve your experience and security.

Falling off the peak of Mt Stupid 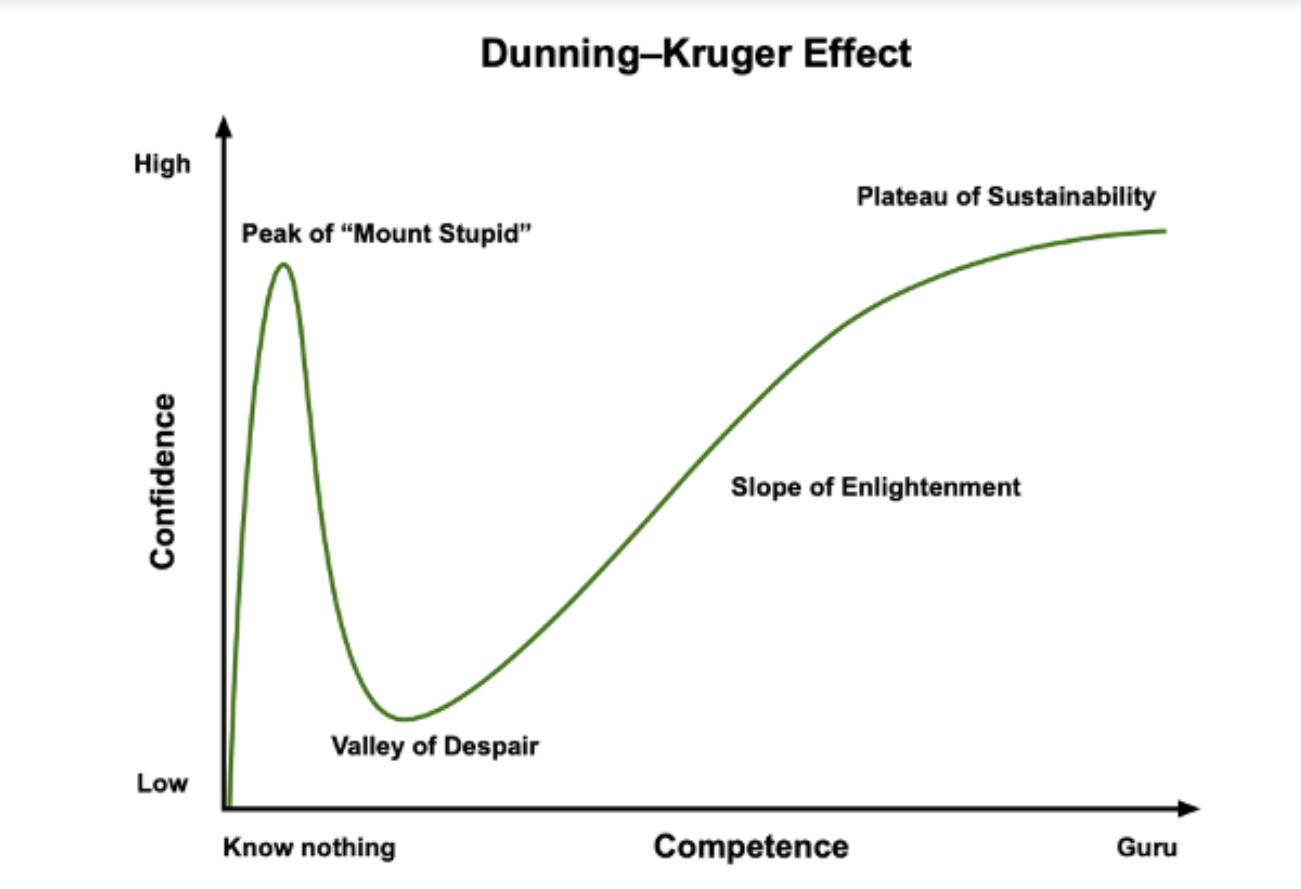 The following story is an excerpt from Dan’s book ‘Average 70kg D**khead’ that with hindsight is a great illustration of the cognitive bias known as the Dunning-Kruger effect[i] in which people have a tendency to believe that they are smarter and more capable than they really are.

It wasn’t until we were well into the research for The Resilience Shield that I became aware of the actual psychological underpinnings and formal name for what I had experienced as a junior doctor, however I did recognise it at the time as an episode of my confidence significantly exceeding my competence, leading to near disaster.

The situation occurred when I was a junior doctor and was doing a rotation in a small town in outback Australia. Being one of only two doctors in town at that stage I was afforded the opportunity to practice procedures that I would have been unlikely to have the chance to do in larger centres where more specialist doctors were in abundance.

While I was trained in the procedures, I was inexperienced, and with hindsight my confidence at the time significantly outweighed my competence making me dangerous. I was conducting a skin lesion excision clinic on the particular day in question and had spent the morning cutting out various moles and other skin lumps and bumps from all manner of patients’ body parts. The clinic was going well and as it progressed my false confidence grew and grew right up until the point where it took an abrupt turn for the worse. I had been in the process of removing a cyst from the neck of a middle-aged woman at the time of the event and recall talking jovially with the patient as I did so.

The procedure was being performed under local anaesthetic leaving the patient fully conscious and aware, with her neck draped in the usual manner to achieve surgical sterility. I had failed to give due consideration to the underlying anatomy of the woman’s neck, most notably the significant series of pipes that carry blood to and from the brain, and as I chatted and chopped my attention was suddenly drawn to a pipeline of a blood vessel pulsating out of the excision site that I was creating by removing the cyst.

I immediately froze and stopped talking, the significance of what I had almost done dawning on me at the exact same time as a cold sweat hit my brow and I felt the colour drain from my face. I had inadvertently neatly dissected out the woman’s carotid artery and but for the grace of God had not put my scalpel straight through it. I regained my composure and completed the procedure with the woman none the wiser, but myself significantly wiser. To have cut that patient’s carotid artery in that remote location would have been an absolute disaster and the very fact that I had almost done it was a direct result of false confidence in my own abilities. As I write this book that event occurred more than 12 years ago, but I still feel my heart race and my palms sweat when I stop to think hard about it. From that day forth I became very cognizant of not allowing my confidence to outweigh my competence, and I never put a knife anywhere near a patient’s skin without due consideration of the anatomy below![ii]

What had happened is beautifully illustrated in the following diagram and is represented by a fall from the peak of “Mount Stupid” to the “Valley of Despair”. 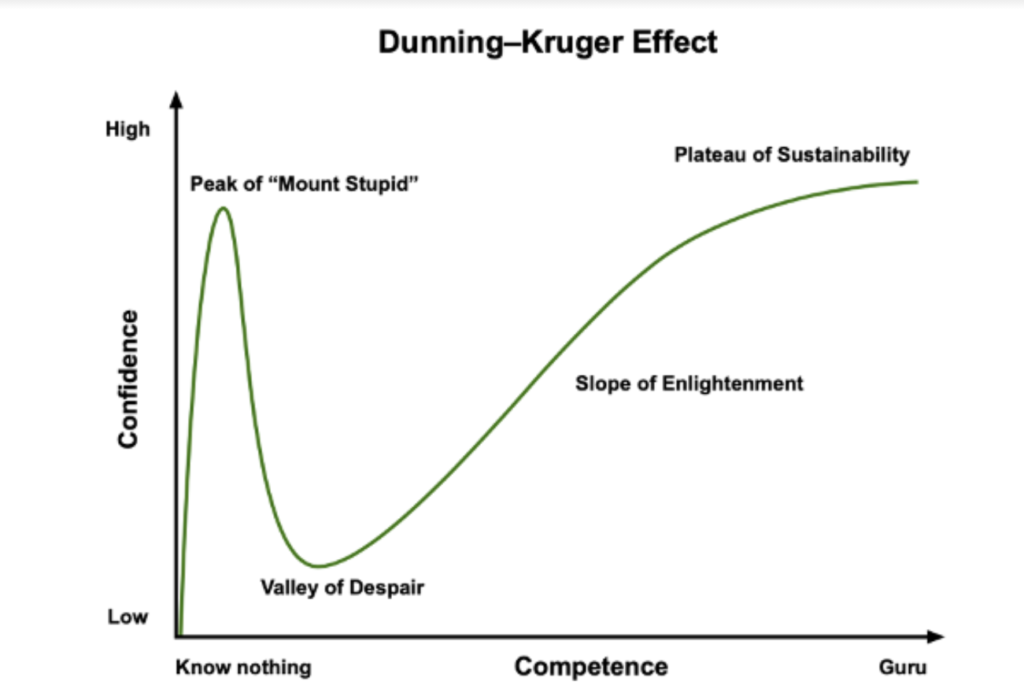 My confidence at the time was falsely bloated due to the simple fact that I had accumulated a degree of experience in minor surgical procedures and up until that time nothing had gone wrong. My competence on the other hand was still very much in the “Know nothing” category on the x-axis of the graph above, however what made me dangerous in the situation was that I was completely insightless to this fact. The near miss was the reality check I required to burst my bubble of false confidence and to gain the insight required to commence on the slow trudge up the “Slope of Enlightenment” in a manner where my improvements in competence were commensurate with legitimate competence.

Most of us will be moving through life with a degree of the Dunning-Kruger effect at play in some life domains. It may be that just because we haven’t ever had a serious car crash that we overestimate our driving abilities, or perhaps because our boss hasn’t ever pulled us up on our work performance that we believe we are doing better than we actually are. We may overestimate our chess playing ability due to the fact that we only ever play chess with our kids and can easily beat them if we choose to. Interestingly, the author’s original work on the bias suggested that those scoring in the bottom quartile on tests of humour, grammar, and logic were those who were more likely to grossly overestimate their test performance and ability[iii]. It was proposed that a lack of metacognition or self-monitoring skills robbed those individuals of the ability to accurately evaluate their own competence, or to accurately judge the competence of others against which they could benchmark themselves[iv]. On the other end of the spectrum, those scoring higher on tests of humour, grammar, and logic had a greater ability to accurately estimate their capabilities and had a tendency to underestimate their performance in comparison to others[v], demonstrating a significant degree of metacognition. At the extreme upper end of this spectrum can exist those high performers who scrutinise their performance so harshly that they suffer from what is known as imposter syndrome – but that’s a topic for a whole other post!

We challenge the reader to reflect on their own performance across varying life domains and look hard for areas where you have a high degree of confidence in your ability however lack objective evidence of your competence to validate that confidence. It may be that you’re poised on the edge of Mt Stupidity and could fall into the Valley of Despair at any moment! A good hard look in the mirror and some difficult, but much needed insight might just be the key to pulling you back from the precipice and start you on the Slope of Enlightenment without the need for a fall.

Stay in the loop to receive news and updates